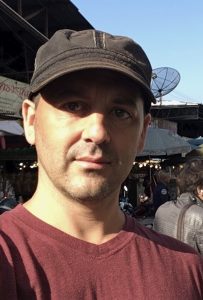 Bryson Newell is the host of The Somatic Primer Podcast.

The platform is a continuing education program that uses his experience in meditation and the somatic arts as the basis for the show. The Somatic Primer Podcast promotes cross discipline somatic dialogues that strive to discover the common threads that run through them all. The show explores various approaches and understanding of the body-mind complex.

Bryson Newell graduated from the University of Dayton with a degree in education. He taught for several years in Istanbul, Turkey before traveling to India and Nepal to further his studies in T’ai chi ch’üan, yoga, and meditation. While living abroad, he was introduced to Tibetan Buddhism. Immediately impressed with the depth of this tradition he began intensive study. He completed the retreats for the Tibetan Buddhist practices of the Drikung Kagyu Ngondro and The Five Fold Path of Mahamudra.

He began studying Japanese martial arts as a child and then later he was introduced to the Taoist Neigong practices focusing on Qigong and Taijiquan. Simultaneously he began practicing the Alexander Technique which organically led to the Feldenkrais Method by which he finally arrived at Hanna Somatics. He was a student on the Alexander Teacher Training course when he was introduced to the Somatic Method created by Thomas Hanna. Understanding the lineage of these Somatic traditions he devoted his time to Hanna Somatics.

His practice and teachings focus on the inner principals inherent in these systems. He created Somatic Fascia Restructuring to clearly define the “means whereby” of Somatics and body mechanics so practitioners can develop systematically through their own efforts. His Somatic Fascia Restructuring lessons are internal somatic education classes that teach people how to find freedom through conscious internal movement principals.

He is currently teaching Buddhist Tenets, meditation, and Somatic Fascia Restructuring.  He teaches locally and internationally.

The Field Of Study Dealing With Somatic Phenomena